Today, the Fibre Channel Association announced its Gen 6 spec with 128 gigabits per second.  For many, that sentence may not make any sense.  For the benefit of my readers, I really do try to simplify things.

So, let me start over.  Connectivity to disk or connectivity over the network is measured in speeds of gigabits per second (gbps); it used to be in mbps.  An important note is that these are “bits”, not “bytes” which are 8 times larger.  So, when you hear a network is 1gb, it is 1 gigabit per second, and thus 125 megabytes per second.  Networks tend to be measured in bits, as opposed to files which are measured in bytes.

Now, that I went on a tangent, let me come back again.  So, when you hear that you have a 1gb ethernet port on your PC or laptop, or that you wireless router does 54mb, this is the size of the pipe.  This does not mean that you can push that much data.  Also, the speed of the network isn’t the only thing.

As an example, I was working with someone recently who was trying to compare 10gb ethernet to 8gb fibrechannel (both ethernet & fibrechannel are networking protocols, the latter is exclusively for disk access).  “Well, 10 is greater than 8, so that is better”.  I respond, “well, I don’t know if you are capable of pushing data that fast.”  (I didn’t even want to get into the discussion of potential redundant pipes).

When the network is dedicated to a server, it is less important than when the network is shared.  “Oh we have <blank> gb for our network, why are things so slow?”  Well, the best way to explain it for shared network is to think in terms of lanes on a highway.  Just because I have lanes on the highway, that doesn’t mean I get to go faster.  When networks are slower and multiple users, then there is the possibility of more congestion.   So, greater bandwidth will make things go faster.

But, if there is no congestion, then there are still limits to how fast packets go from point A to point B.  That is “latency”.  If I want to go from one part of town to another part of town, then it doesn’t matter if there is little traffic or no traffic, it still takes time to go from A to B.  If there is lots of traffic, then yes, it does matter.  But, that is when and why it feels that more bandwidth is better. 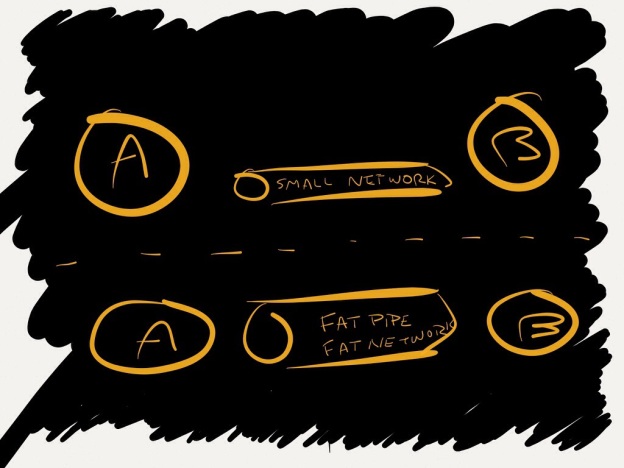 The lesson is not to confuse bandwidth with latency.  It also means that one shouldn’t get too excited when they hear the new speeds of networks.

(I don’t accept general LinkedIn invites – but if you say you read my blog, it will change my mind)